Now, you can sample a FREE TRACK from “The Spirit of 76-The Story Continues”! ENjoy this FREE, 10 minute long, sneak peek behind Mike Church’s epic telling of the originas & meaning of the 2nd Amendment to the U.S. Constitution.

Preview: Patrick Henry pours cold water on the Constitution as it was originally written by the Founding Fathers

Mandeville, LA – The greatest story never told about the Founding Fathers gets an extension! It is June of 1788, Patrick Henry, George Mason and other VA patriots are heroically trying to stop ratification of the U.S. Constitution. Why? Because they believe the new government will seize more power than it is allotted including the most dangerous power of all: fielding a standing army. Henry’s efforts help guarantee that a Bill of Rights must be written to protect the States’ militias from being disbanded by Congress. Writer-Narrator-Director Mike Church takes us back to 1788 and VA’s ratification to tell the “rest of the story” he could not when “The Spirit of ’76” was released in 2009. Find out the story behind the 2nd Amendment!

“The Spirit of ‘76-The Story Continues” Contains

• The Theme Music for “The Spirit of ’76” – Never before released

5. Mike Church Interview- Making  of The Spirit of ’76

The Spirit of ’76 – The Story Continues

This is a wonderful gift for any collector of history.  There are ONLY 100 copies signed and numbered by the writer and director Mike Church.   Gets yours while they last!

The NEW “Spirit of ’76 – The Story  Continues” has a section on militias so what better to company this audio set than….I’m The Minuteman, Militia Membe[r] Your Gun-Banning Liberal Friends Warn You About t-shirt is the SHIRT for you! 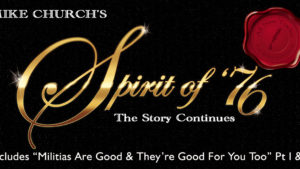