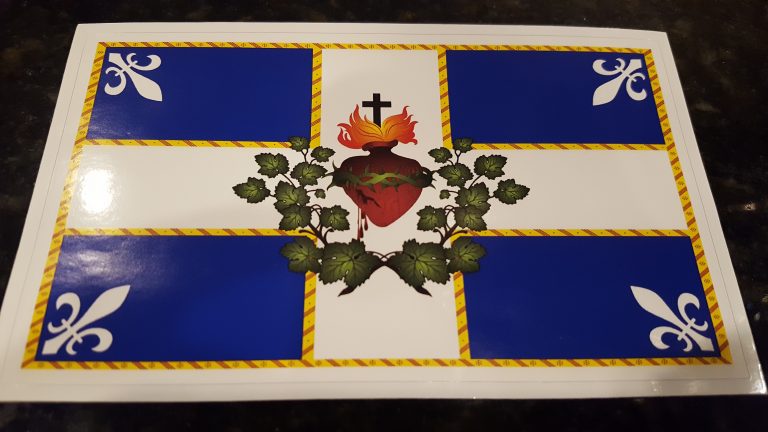 These stickers were graciously donated by Jeff & Brenda Korson to help raise money to further our CRUSADE. Many thanks to the Korson Family and our many listeners that selflessly donate to our CRUSADE by being a Founders Pass member, purchasing from the Founders Tradin’ Post and/or by gifting memberships. We love our Veritas Network Family.

Bulk Discount: order 10 or more stickers drop to $1 each (discount automatically applied at time of checkout)

History of the Flag:

In 1903, a group of Jesuits and lay people in Quebec adopted Carillon-Sacré-Coeur as the national flag of French Canadians. Very quickly, other committees were set up throughout French Canada, from Quebec, Northern Ontario, to New Brunswick, to promote it. Nationalist circles were seeking to acquire a distinctive sign to replace the French tricolor (the flag of France) which was very popular among French-Canadians in the 19th century. The Carillon-Sacré-Coeur was a great success and is deployed in most major patriotic events throughout the first half of the 20th century, as elsewhere in Ontario.

In the center of the Carillon-Sacré-Coeur flag you can see the Sacred Heart wearing a crown of thorns, surmounted by a cross and surrounded by a garland of maple leaves. The blue background is in reference to Our Lady. The banner is crossed with a white cross and features to all over the lily, symbol of the French monarchy and also of Our Lady.

As you can see there is tremendous Catholic/Christian imagery within the flag. This Catholic identity was very strong and very much a part of French Canadians lives.

During the 1960s, a significant break occurs between the various components of French Canada. In Quebec, the identity of “Quebec” replaces the identity of “French Canadian”. This break was also a part of the Quiet Revolution (Révolution Tranquille)which was a period of intense change characterized by rapid secularization of society and the creation of a welfare state to replace the role of the Catholic Church. The government seized control over education and health care that had been in the hand of the Catholic Church since the first French settlers arrived on the shores of North America hundreds of years ago.

Unfortunately, French minorities in other provinces were adapting to this ideological break also and giving way for new symbols to sever their ties to the Church. In 1964, following discussions on the adoption of a Canadian flag, the Federation of Saint-Jean-Baptiste in Ontario offered a Franco-Ontarian flag.

In 1975 the Franco-Ontarian flag was adopted and raised for the first time in Sudbury. The flag features both traditional lily and trillium Ontario on a green background and white colors that evoke the summers and winters in the province. As you can see the Catholic identity has been replaced with provincial identity of a lost and divided French Canadian people. Christ unites, Satan divides and destroys.

Once the beloved Catholic province of Quebec now is the most secular region in North America, has the highest per-capita rate for abortion, lowest marriage rate, the lowest church attendance, it is the oldest region by population (because they abort most of their babies), and has largely become a welfare state.

St. Jean Baptiste, Patron Saint of French Canadians and of Quebec we ask for your intercession that they may rediscover their faith and their true identity – their Catholic identity. ~ David Gilbert 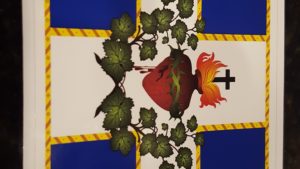