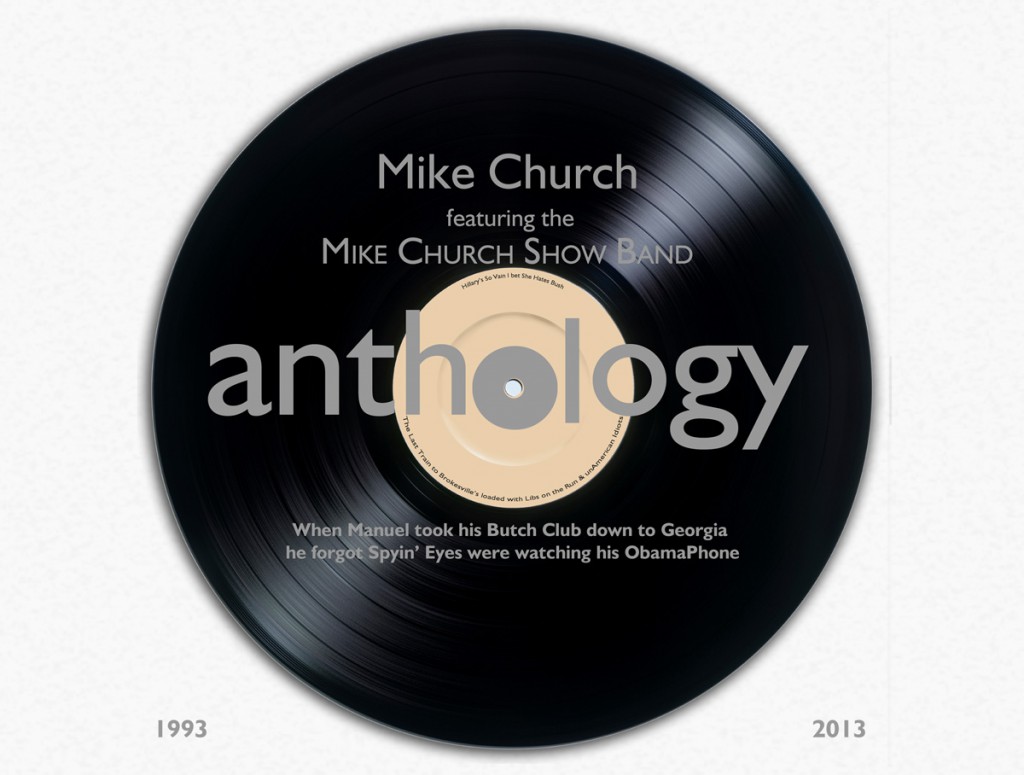 The Compilation of The Mike Church Show Band ‘s Greatest Hit Parody Songs PLUS a 130 page autobiography of the band and Mike’s early radio career.

“There is nothing like it anywhere else as it is a creation of Mike Church’s imaginative mind.” – Anthology owner Bill Evelyn

The 3 Disc Compilation of The Mike Church Show Band ‘s Greatest Hits Parody Songs PLUS a 130 page autobiography of the band and Mike’s early radio career. If you’re wondering what an “anthology” is, well it is the chronological story of the Mike Church Show Band with a twist: HOW did they make all those great parody songs!? Unlike a mere “Greatest Hits” compilation, Anthology will introduce you to versions of your favorite songs as Mike and the boys developed them AND includes the final “master” recording.

In producing this collection Mike recovered versions of songs he didn’t even recall saving like the Band’s most popular song of 2006 “Democrats Somewhere”. Mike and Jimm Mosher restored the last version of the song made before it was discovered that G. Gordon Liddy would bail on his agreement to provide the answer to “What would G. Gordon Liddy do?”. This story and many more are contained in the 132 page autobiography book that comes with this collection. There are  67 tracks of your favorites like:

Manuel Went Down to Georgia

For the First Time EVER: “Mr. Jefferson LIVE”

What are fans saying about “Anthology”?

“I had the opportunity, or should I say, good fortune to listen and rate the new Mike Church Show Band Anthology. I listened to the parody songs twice and graded them on the following criteria.

1.  Creativity
2.  Quality
3.  Did I like it?
4.  Do I think others will like it?
In all cases I rated #1 and #2 100% of the songs were rated creative and of high quality.  I also believe 63% of the songs would be liked by others. meaning I liked 86% of all the songs. There are great songs and one I use as a ringtone at Christmas – Grandma Got Run Over by Obama. My favorite song that I feel is the most creative and likeable is Hilly’s Healthcare.  It is just a great song on its own.
The creativity and quality of every track in the Anthology is unmatched.  There is nothing like it anywhere else as it is a creation of Mike Church’s imaginative mind. If you want an entertaining experience then you should get this unmatched Anthology. – Bill Evelyn

123 pages of pure, Mike Church Show history.  Mike takes you back all the way from the beginning….when it all started, to where he is today.  He gives you an inside look into what gave him the ideas of each song, how they came about to be and how he maneuvered vocals and tracks to give you the wonderful pieces of art you see here! 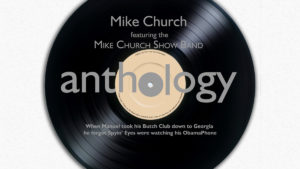