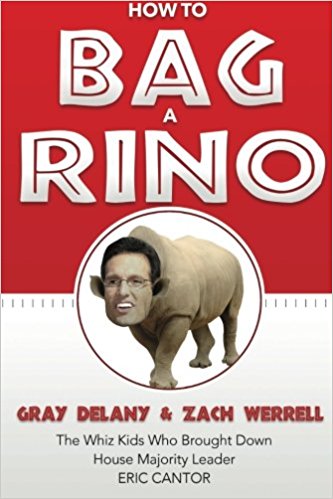 How to Bag a Rino by Gray Delany & Zach Werrell

The defeat of House Majority Leader Eric Cantor on June 10, 2014, was the most stunning upset in modern political history. Shown by his own polling to be leading by 34 points in the Virginia district he’d represented fourteen years, outspending little-known primary opponent Dave Brat 40-1, Cantor widely presumed to be the next Speaker was crushed by eleven points. Typically, the elite media had totally missed the story, buying into the narrative of Cantor-the-inevitable. Meanwhile the Brat campaign was putting together a vast, highly motivated grassroots army that day by day, voter by voter, was exposing Cantor for who he really was: not the staunch young gun conservative he played on TV, but one of the nations leading RINOs (Republican in Name Only), indifferent to his constituents, deeply self-interested and a key behind-the-scenes Democrat enabler on Obamacare, immigration and spending. The architects of that remarkable, against-all-odds victory were 23-year old Zach Werrell and 24-year old Gray Delany. In How to Bag a RINO, they reveal in detail how it was achieved, and why it is a model for similar insurgent GOP campaigns across America as grassroots Republicans fight to take back their party, and the country.

“This is the book the Republican Establishment does NOT want you to read” (Peter Schweizer, author of Clinton Cash and Throw Them All Out)

How to Bag a RINO tells the first-hand story of what is probably the most stunning upset in a party congressional primary in American history.  Its young authors, ages 23 and 24, were at the center of the events in 2014 in Virginia that created worldwide coverage.  Anyone who wants to understand what is possible now in grassroots politics should read this book. (Morton Blackwell, founder, Leadership Institute) 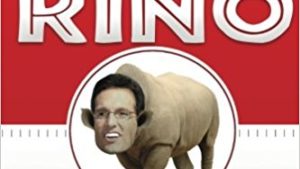