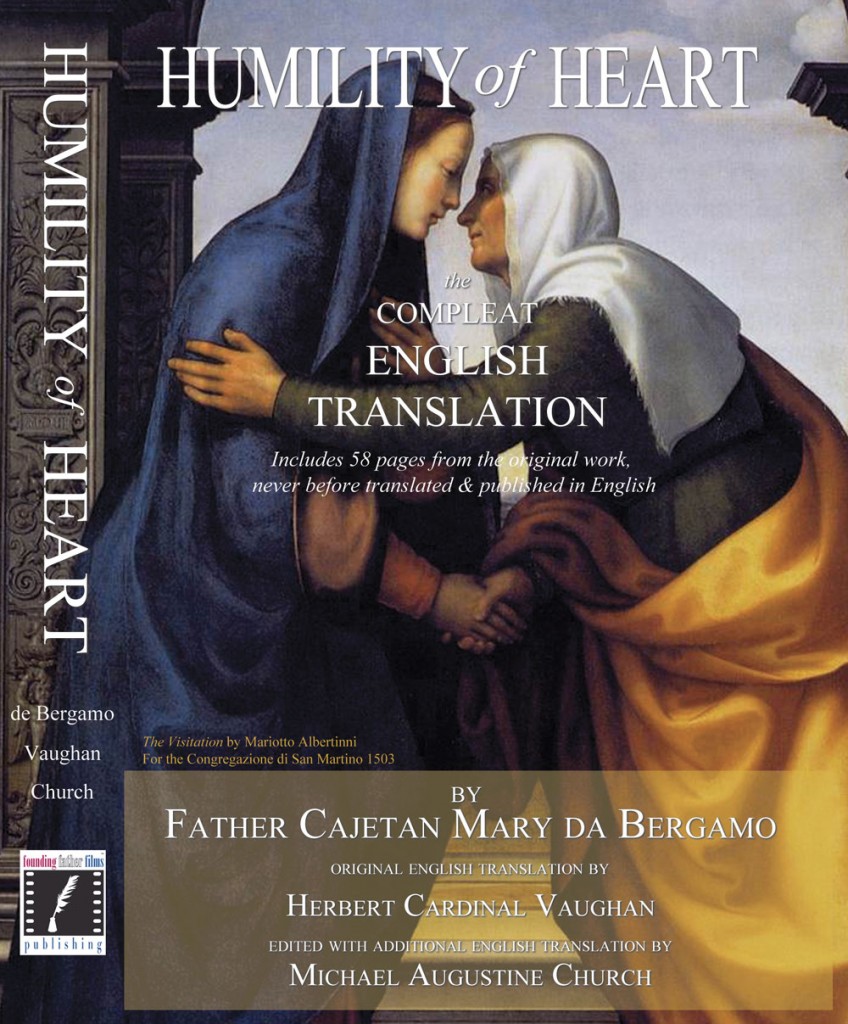 John Horvat, author of Return to Order says of THIS edition of Humility of Heart.

“In reproducing Herbert Cardinal Vaughan’s excellent translation of this spiritual classic, editor Michael Augustine Church has rendered a great service to Catholics everywhere. Reprinted in 2015, his painstaking review of the text includes a new index and updated reference materials. In addition, Mr. Church found 59 pages of the original text that have never been translated into English. Despite the ideal positioning of the book in the market, there is no possibility that it will become a runaway bestseller. While there is a universal need for the book’s message, there is also a general aversion for the topic. People know they should be interested in humility, but they reject its bitter medicine. The market that seems so promising is reduced to very few.”

“Mike Church has done English readers all a service by putting some heretofore untranslated parts of Humility of Heart into our tongue. The parts that were left out contain Marian treasures that all true devotees of the Blessed Virgin will welcome. Those dedicated to Saint Louis Mare de Montfort’s spiritual doctrine of True Devotion (Marian consecration based on Marian mediation), will appreciate how Fra’ Gaetano Maria da Bergamo ties in that doctrine with growth in humility. After first laying the doctrinal foundation of Marian mediation, the learned Capuchin friar then proceeds to lead us to the hight of Marian devotion (which Saint Louis Marie identified as imitating Mary’s virtues) by offering his own rich meditations on the fifteen mysteries of the Holy Rosary. Jesus commands us, as Father da Bergamo repeats throughout the work, to learn of Him because he is meek and humble of heart. In His very Incarnation, He also gave us another example of humility: the peerless Woman He chose from all eternity to be His Mother — but who was so humble that She called herself a handmaid (Greek: doula, “slave”) at the very moment when the divine proposal was made (Cf. Luke 1:38). Prayerfully meditating on the humility of Jesus and Mary, as the author has us do, leads us to imitation and progress in perfection.”-Brother André Marie, MCIM

Father Chad Ripperger praises our edition of Humility of Heart!

Some book recommendations from a Fr. Ripperger video on Sensus Fidelium. pic.twitter.com/K3LuOKb4R4

CLICK TO READ A 75 PAGE FREE PREVIEW OF THIS EDITION OF HUMILITY OF HEART!

Edited with additional English translations by Frederick Michael Augustine Mary (Mike Church). This volume contains, for the first time EVER, the final 58 page section of Humility, included in all Italian editions but omitted in ALL English editions until now. Mike Church has performed the signal task of translating those 58 pages PLUS the 4 page introduction written by Fr. Bergamo, Plus the Imprimatur granted by the Vatican in 1792, PLUS decoded all of Fr. Bergamo’s footnote citations and updated the references so modern readers can consult Bergamo’s sources, and included them all in this edition! This is the most comprehensive and compleat edition of Fr. Bergamo’s internationally loved work “Humility of Heart” and is presented here in a paperback, collector’s format that will be passed down for generations.

“HUMILITY OF HEART” which is best described by Father Gaetano de Bergamo the author of the original work as summarized recently by the web-blog Unam Sanctam Catholicam:

In the early 18th century, a priest named Fr. Cajetan Mary de Bergamo (d. 1753) wrote a treatise entitled Humility of Heart, which was popularized by the English Cardinal Vaughn in his 1903 translation and has subsequently become a classic on the virtue. In his treatise, Bergamo insists on the universal practice of humility, but notes that the way humility looks externally will vary depending on one’s station in life.

Frontispiece printing of the Albertinni painting “The Visitation”

Appendx featuring the compleat preface and history of the English translation

New Table of Contents and Index

Changing 1 Humble Life at a Time Through Humility of Heart, A Perfect July Gift:

“You’ve heard me talk about this book over and over on the radio show and how it changed my life. This Lent, do your soul a favor and pick a copy of Humility of Heart up, better yet, buy 2 because you are going to want to give your copy away to someone, you will realize, who needs it more than you.” ~ Mike Church