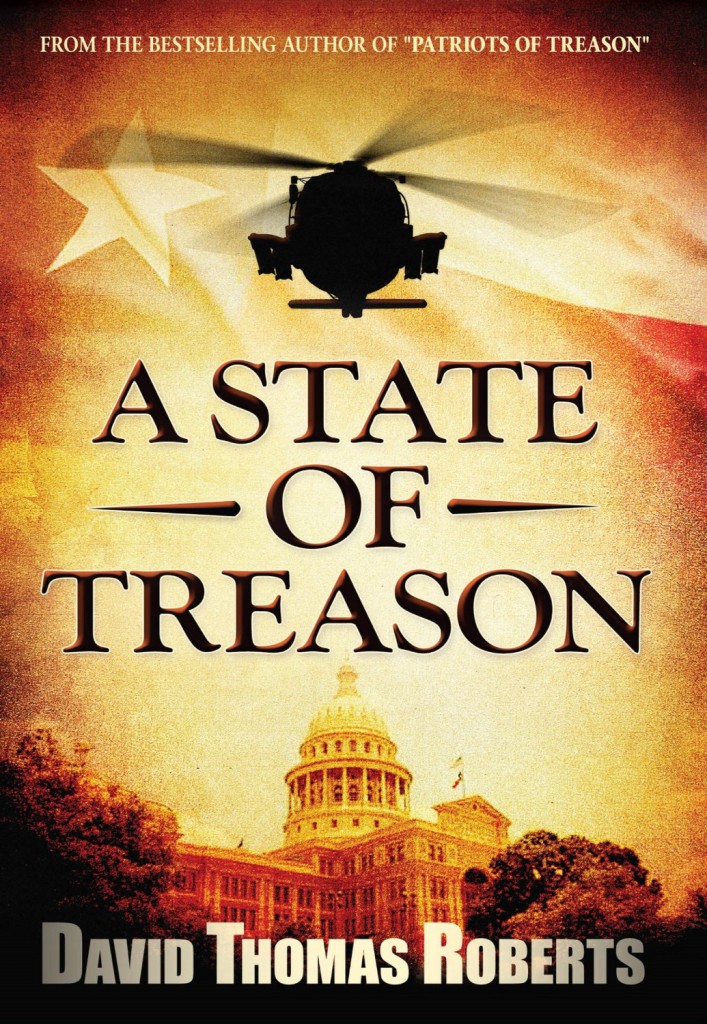 Add this item to My Wishlist
If you purchase this item you'll earn 44 Tradin' Points!
Compare

A State of Treason (hardback edition)

Book Description: With mid-term elections right around the corner, David Thomas Roberts couldn’t have timed the release of his new book any better. Patriotic to the core, and passionate about all things ‘Texas,’ this is Roberts’ second foray into the political thriller arena.

“The book is sure to have an impact on anyone who feels the government is threatening individual liberties by overstepping their power in open contempt of the Constitution,” says Roberts.

A State of Treason (Defiance Press) is a hair-raising cautionary tale that throws liberty-loving Texans and their governor into a whirlwind of danger in their fight for freedom. “The book is sure to have an impact on anyone who feels the government is threatening individual liberties by overstepping their power in open contempt of the Constitution,” says Roberts.

Thanks to a U.S. President with outward contempt for the Founding Fathers and the limits of the U.S. Constitution, and an administration that is constantly embroiled in scandals, the U.S. electorate is more polarized than in any other time in modern history.

Determined to eradicate its political enemies, namely the Tea Party, the administration orders unconstitutional actions that include warrantless arrests of its Texas members.

As the Governor of Texas (self-described mortal enemy of the president) orders the rescue of a Tea Party organizer being held by the feds, it sets off a cataclysmic power struggle between officials in Texas and Beltway politicians that results in arrest warrants of duly elected state officials.

As history has shown us, there is a price for freedom, and as the ripple effect of the crisis in Texas is felt around the world, the president suspends the 2nd Amendment and declares martial law in a frantic attempt to stop the people of Texas voting for Independence. Texas is now in A State of Treason…

Mirroring many events in our country today, the book is already drawing high praise in early reviews. Readers agree it has all the twists, turns and intrigue of a Vince Flynn novel with an electrifying pace that keeps them frantically turning pages, but not wanting it to end. Destined to become another bestseller, Roberts’ latest novel is an adrenaline-pumping read all the way to its climactic ending!

About the Author: David Roberts is a sought-after speaker, serial entrepreneur and successful businessman. Active in politics, he frequently speaks to groups regarding business and Constitutional issues and is a requested speaker for statewide Tea Party organizations. Roberts is the Founder and CEO of Teligistics, Inc., a leading global telecom technology solutions and consulting provider, handling complex telecommunications contracts of many Fortune 500® clients. His white papers and other published works are considered the industry-standard for Best Practices regarding the sourcing of telecom-related services, and he has served as an expert witness in numerous high-profile telecommunications trials.

Recently adding a publishing company to his list of business ventures, Roberts also owns and operates a music recording studio geared for Texas country artists. As a published author, he is proving a hot contender in the political thriller genre; his first novel Patriots of Treason having hit several bestsellers lists. His inaugural business book on entrepreneurship is slated to be released late this year.