Looking for the DVD edition of the Spirit of  ’76? it is HERE!

Mike Church’s The Spirit of ’76” tells the real story of the Founding Fathers writing and ratification of the Constitution!

Preview: The Convention Begins on a dark, cold, rainy day and George Washington accepts appointment as its President

Preview: Patrick Henry demands to know “Who authorized [James MAdison & co] to speak the language of ‘We the People’ Instead of We the States & thus begins his opposition to the Constitution

Preview: Was sabotage to blame for the failure of New York & Virginia to unite in opposition the the Constitution’s ratification!?

“The Spirit of ’76” tells the real story of the Founding Fathers writing and ratification of the Constitution including the world’s first portrayal of the most important yet untold piece of the story: the Virginia Ratification Convention and the patriot Patrick Henry’s “manly opposition”. Henry who made famous the phrase, “Give me liberty, or give me death” has a starring role in the feature. His arguments against ratification, beautifully portrayed by voice actor Jean Hetherington, sound more like prophecy than they do debate.

“The Spirit of ’76” transports you back in time to Independence Hall and see it with Emmy-award winning actor Jay Thomas and an ensemble cast of some of radio’s best-known voices. “I was always extremely proud of what I achieved with ‘The Road to Independence’ and “Fame Of The Fathers,’” Church noted. “But it was time to take things to the next level with ‘The Spirit of ’76, this is historic cinema!.”

Mike directed the entire project and Dr. Kevin Gutzman of “The Politically Incorrect Guide to the Constitution”  and “James Madison & the Making of America” served as historical consultant so founding fathers accuracy is assured.

Our story begins in the office of Richmond Enquirer newspaper publisher Thomas Ritchie and the next 2:45 minutes transports the listener to Independence Hall, Washngton DC, the Graff House where Jefferson wrote the Declaration, New York City and Richmond’s New Academy of Arts & Science on Shockoe Hill. 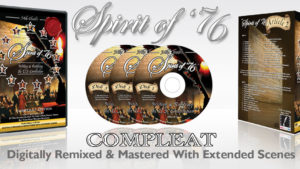