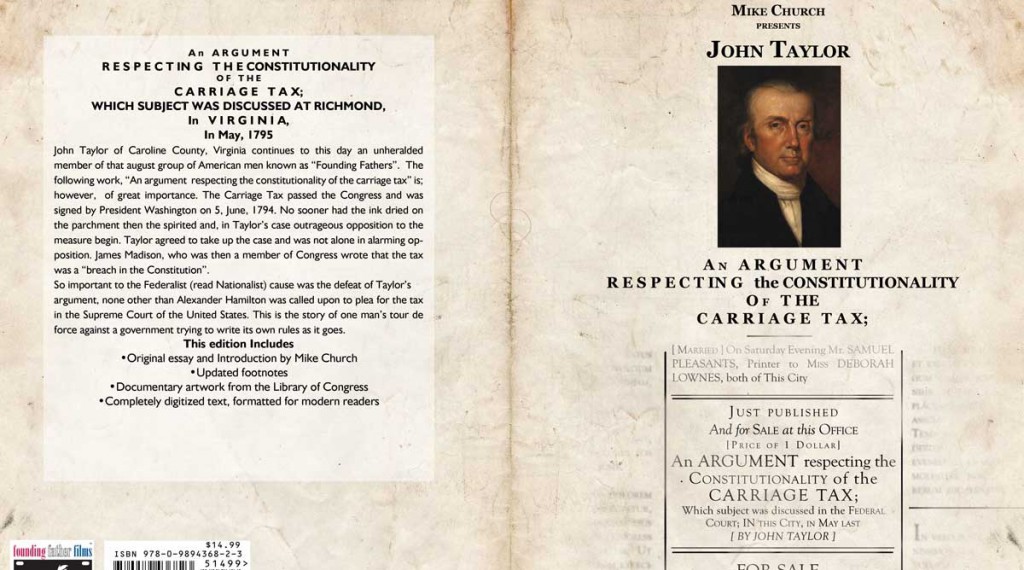 An Argument On Constitutionality of Carriage Tax by John Taylor, the finest argument ever made against Congress’ power to tax

61 in stock (can be backordered)

Add this item to My Wishlist
If you purchase this item you'll earn 25 Tradin' Points!
Compare

An  ARGUMENT RESPECTING THE  CONSTITUTIONALITY OF  THE  CARRIAGE  TAX

In V I R G I N I A, In May, 1795
John Taylor of Caroline County, Virginia continues to this day an unheralded member of that august group of American men known as “Founding Fathers”. The following work, “An argument respecting the constitutionality of the carriage tax” is, however, of great importance. The Carriage Tax passed the Congress and was signed by President Washington on 5, June, 1794.

No sooner had the ink dried on the parchment then the spirited and, in Taylor’s case outrageous opposition to the measure begin. Taylor agreed to take up the case and was not alone in alarming opposition. James Madison, who was then a member of Congress wrote that the tax was a “breach in the Constitution”.

So important to the Federalist (read Nationalist) cause was the defeat of Taylor’s argument, none other than Alexander Hamilton was called upon to plea for the tax in the Supreme Court of the United States. This is the story of one man’s tour de force against a government trying to write its own rules as it goes.

What Others Have Said About The Work:

“If James Madison was the political general of the Jeffersonian coalition, John Taylor of Caroline was the theoretical brains of the operation.  Jefferson wrote at the end of his life that Taylor had never written anything that Jefferson didn’t support.  Mike Church has done a great service in resuscitating and providing a clear introduction to this long-neglected pamphlet.  It is a classic example of Taylor’s work against the Hamiltonian statists of the 1790s, and its principles are as timely now as ever.”

Author, _James Madison and the Making of America 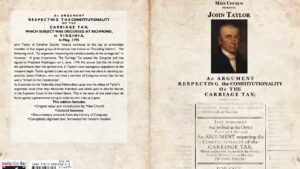 You're viewing: An Argument Respecting The Constitutionality of the Carriage Tax by John Taylor $5.00 $5.00
Add to cart