Add this item to My Wishlist
If you purchase this item you'll earn 249 Tradin' Points!
Compare

Why assemble a biography of an obscure, 18th century Virginian who never earned the title “founding father”?  Chiefly because there has not been an attempt to paint a lifelong picture of our subject, predominantly using his own, short form works. Even if this  task were successfully undertaken there remains another reason John Taylor doesn’t appear on Liz Cheney’s radar. He has a reputation of being very difficult to read. John Randolph of Roanoke is said to have quipped. “Taylor’s writing is profound, now if we can just translate it into English.” The purpose of this collection is to demolish that argument. One tool to use in this quest is to read Taylor’s work as satire aimed at the principal target of his work: Federalists. Taylor spent a career proving the anti-federalists of the 1780’s correct and the nationalists wrong, sometimes hilariously. Now, in John Taylor – American Statesman all Americans can learn and be entertained by the works of this gifted leader of the republican school of political thought.

With this new edition of selected John Taylor works, some never republished before, Mike Church does the signal service of reminding us of the foremost Jeffersonian publicist–and one of the Early Republic’s most principled politicians.

“Mike Church has resurrected the ghosts of secession past by bringing to light both the great John Taylor of Caroline and the Northerners who insisted the sections should part ways…in 1794!  Taylor was the greatest political thinker of the early republic and a needed counterweight to the modern nationalist centralization hysteria of both mainstream political parties.  Every politically active American should know John Taylor.”

–Brion McClanahan, Author, The Founding Fathers Guide to the Constitution

John Taylor of Caroline County-American Statesman is NOT a history book, it is an exciting biography & collection of works from the “brains of the operation” behind the political dynasty of the Jeffersonian [r]epublicans, John Taylor.

This collection combines historically accurate biographies of John Taylor of Caroline with Taylor’s own, little known, rare and  previously unpublished works. From arguing against Congress’s taxing power to a satire on Big Government under the Constitution, John Taylor-American Statesman introduces new audiences to one of the great minds of the American Revolution.

Most people think the Louisiana Purchase was unconstitutional. Thanks to Taylor’s Senate speech defending the treaty on Constitutional grounds, that urban legend can be dispelled.

Taylor was the first to argue against Congress’s new, “constitutional” taxing power before the Supreme Court in the “Argument against the Carriage Tax.”

Taylor rejected his lifelong friend, James Monroe’s friendship once Monroe was elected President so he could “remain in the opposition” and much more.

Mike Church is a New Orleans native and a radio host appearing daily on the SiriusXM Patriot Channel. He is an author and editor of “Patrick Henry-American Statesman” and is the writer and director of 7 Docudramas on American history including “The Spirit of ‘76” and the recently released “Times That try Men’s Souls-Washington’s Crossing”. 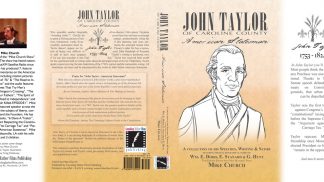