Add this item to My Wishlist
If you purchase this item you'll earn 124 Tradin' Points!
Compare
SKU: BH-BK-STFERN Categories: Autographed by the author, Books, Books by Catholic Authors

Saint Fernando III Book Description: The greatest Spanish monarch, King of Castile and Leon, St. Fernando III was born in the year 1199 – exactly 100 years after the death of his illustrious ancestor, El Cid. In him would be combined the soul of a knight dedicated entirely to God, the irresistible power of the Cid, and due to his royal heritage, the authority to marshal the might of an entire kingdom against the enemies of Christ. Personally leading his armies into battle, he took back more territory from Islam than any other king in history. First cousin of St. Louis IX of France, he died a saintly death in the year 1252. His incorrupt body can still be seen in the Cathedral of Seville, and his feastday, May 30th, is a holy day of obligation in Spain.

(As with all books sold in the Founders Tradin’ Post, this book is autographed by the Author.)

El Cid Book Description: El Cid, God s Own Champion is an inspiring biography of the extraordinary Catholic knight chosen by God to save his nation from Islamic aggression. Known by the honorary title of El Cid, Rodrigo Diaz is a legendary hero who is directly relevant to modern times. Exiled by his king, insulted and maligned by those who should have supported him, he selflessly fought against seemingly insurmountable odds to save Christian Spain. Commanding the respect even of his enemies, upon his death a Muslim historian acclaimed him, a miracle among the great miracles of the Almighty. The Cid is an example of what can be achieved through devotion to duty, prayer, and trust in God. 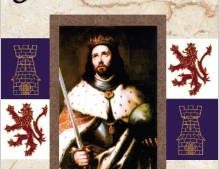