This Thing of Darkness – A Novel From Fiorella Nash & K.V. Turley

Add this item to My Wishlist
If you purchase this item you'll earn 84 Tradin' Points!
Compare
Category: Books

Hollywood, 1956. Journalist and war widow Evangeline Kilhooley is assigned to write a “star profile” of the fading actor Bela Lugosi, made famous by his role as Count Dracula. During a series of interviews, Lugosi draws Evi into his curious Eastern European background, gradually revealing the link between Old World shadows and the twilight realm of modern horror films.

Along the way, Evi meets another English expatriate, Hugo Radelle, a movie buff who offers to help with her research. As their relationship deepens, Evi begins to suspect that he knows more about her and her soldier husband than he is letting on. Meanwhile, a menacing Darkness stalks all three characters as their histories and destinies mysteriously begin to intertwine.

“This novel’s deft blend of fantasy and chilling realities presents a warning about where pride and willfulness can lead, especially when combined, in the beginning, with the subtler seductions of the occult that lead step by step into spiritual and mental territory of utmost peril.”
— Michael D. O’Brien, Author, Father Elijah: An Apocalypse and Island of the World

“This book is easy to pick up and hard to put down, but there is nothing straightforward about it. By turns witty, thought-provoking, puzzling, gut-wrenching, disturbing, and sad, this novel ultimately engages deeply with the faith—but there is nothing facile or superficially soothing here.”
— Sally Read, Author, Night’s Bright Darkness and Annunciation: A Call to Faith in a Broken World

Fiorella De Maria was born in Italy of Maltese parents. She grew up in Wiltshire, England, and attended Cambridge University, where she received a Bachelor’s in English Literature and a Master’s in Renaissance Literature. She lives in Surrey with her husband and children. A winner of the National Book Prize of Malta, she has published four other novels with Ignatius Press: Poor Banished Children, Do No Harm, We’ll Never Tell Them and the first Father Gabriel mystery, The Sleeping Witness.

K. V. Turley is a London-based writer, journalist, and filmmaker, plus a show host on podcast, radio, and television. His writing appears regularly in publications on both sides of the Atlantic. He is the UK correspondent for the National Catholic Register as well as a regular contributor to EWTN. 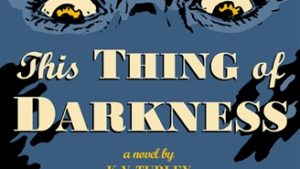